A welcome sign that inflation may be decreasing, price increases fell to 8.5% in July. This represents a significant pull-back from the decades-high peak last month. Many stocks responded positively on Wednesday following the release of the CPI numbers. S&P 500 jumped 2.1%.

As you have likely heard, major U.S. stock indexes stayed volatile last week, and ended on a positive note, Growth stocks captured more attention than value stocks following the previous week’s rally. The chart below shows the CPI numbers, released on Wednesday, for each category as well as the total of all categories. Notable changes are the 4.6% drop on energy, including an 11% drop of fuel oil; a continued increase on food of 1.1%; and a continued increase on new cars (0.6%), despite a small drop in used cars (0.4%). 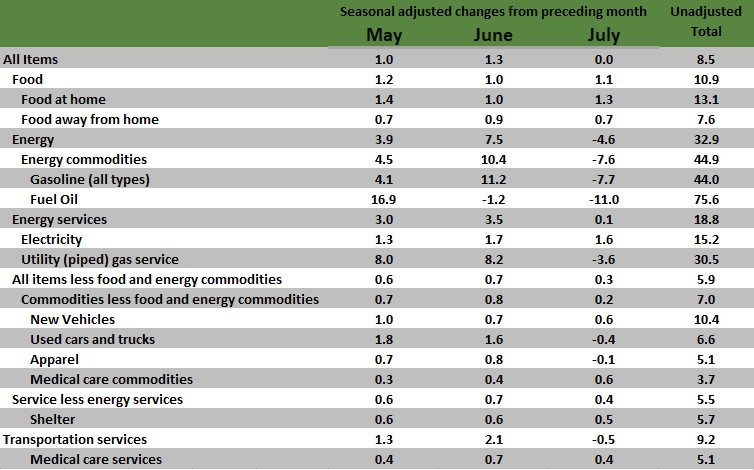 While major stock indexes were mixed, 10-year note yields rose to settle the week at 2.839%, up from the previous week's close of 2.641%. The rise broke a three-week trend of lower 10-year note yields, as the stronger-than-expected jobs report on Friday helped to send yields higher. We will continue to monitor the labor market for additional signs of economic health after the most recent Gross Domestic Product (GDP) data showed two consecutive quarters of contraction.

The broader economy may be slowing, but job growth was explosive in July, with 528,000 jobs created versus Dow Jones estimates of 258,000. In addition, the U.S. unemployment rate declined to 3.5% versus expectations of 3.6% and is now at pre-pandemic February 2020 Levels.

The strong labor market landscape keeps the door open for future rate hikes. At this time, we agree that the highest probability is a 75-basis point hike in September. It is still early (more than 40 days until the meeting), so that consensus could change. There is no Federal Reserve meeting in August.

Consumers are enjoying (some) relief presently, with the price of September crude oil dipping below $90 last week. The decline marks the first time oil traded sub $90 since Russia invaded Ukraine. At the pump, the national average price of regular gasoline dropped to $4.059 at the time of writing, according to data from AAA.

If you have any questions or concerns please contact your advisor.